Northern Health is developing a business plan for the replacement of Stuart Lake Hospital, long-term care beds, and primary and community care.

Visit Let's Talk Northern Health, our online space for updating you on current projects, like the Stuart Lake Hospital Replacement Project, and for giving you a chance to ask questions and be a part of the conversation!

Northern Health is committed to working with the provincial government and the Ministry of Health on capital projects identified as a priority for providing the best care possible.

When a final business case is approved the project moves into procurement. The full process can take varying amounts of time depending on the procurement model chosen, and identified funding.

The Stuart Lake Hospital Replacement project continues to remain on track in terms of scope, schedule budget and quality.

Northern Health has requested and received proposals from three shortlisted proponent teams. Their responses are in regards to the first stage of the procurement for a Design Early Works Agreement (DEWA). The responses are currently being evaluated through an established process in coordination with Northern Health  and Infrastructure BC. Evaluations will continue through the beginning of December into early 2021.

The current proposal phase evaluates the proponent proposals for design using the DEWA  contract. Once the DEWA is signed, the successful Design Builder will pursue getting a Design Build Contract to provide Northern Health with the design and construction of the replacement facility in Stuart Lake. We are expecting to finalize the DEWA contract in January.

On June 18, 2020, the Request for Qualifications (RFQ) for the Stuart Lake Hospital Redevelopment Project closed and Northern Health received five responses from design-builder teams. Northern Health, with Partnerships BC, completed their evaluation and recommended a shortlist of three teams to proceed to the next stage of the process.

The next step in this process will be the release of the Request for Proposals (RFP) for the project to the three proponents shortlisted in the RFQ, this was issued on August 4th, 2020. This RFP process is open only to the top three companies that were shortlisted through the initial RFQ process. They are Clark Builders Design-Builder, Graham Design Builders LP, and The Design-Builder joint venture (JV) partnership between Smith Bros. and Wilson (BC) Ltd. (SBW) and 1229917 BC Ltd., a corporation wholly owned by Wright Construction Western Inc. (Wright).

The first RFP closes in October 2020, and Northern Health, with their consulting team, will evaluate the proposals to select one team to execute a Design Early Works Agreement and then proceed to the next stage, the second RFP for the construction.

A request for Qualifications (RFQ) is a process that allows organizations to consider proposals based on the experience and qualifications of firms interested in submission (a straight tender considers only price). A scoring matrix is included in this process, so that bidders understand what the organization is looking for. This assists in eliminating potential issues, including the avoidance of unqualified bidders submitting the lowest bid. An RFQ also encourages bidders who might otherwise not submit if the field of competition appears too large and the chances of bid success are presumed low. Putting together an accurate yet competitive tender price is a lot of work. If there is a higher likelihood that an unqualified bidder could put in a low bid then this discourages qualified and appropriate bidders from submitting.

Bidders passing the RFQ (usually up to 3) are then able to respond to the next step of the procurement (a Tender or Request for Proposals, RFP) which then results in a Construction Contract (this type of contract requires that the contractor agree to be responsible for job execution at a set price).

The replacement of Stuart Lake Hospital in Fort St. James was announced by BC Premier John Horgan on January 18, 2020. Northern Health is now moving quickly to move the project forward and start the work of procurement, and ultimately construction. 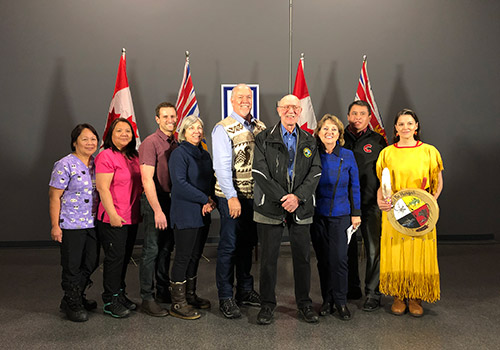 The business plan phase - now underway - will finalize details such as scope and budget for the replacement of Stuart Lake Hospital. This stage takes approximately 12 to 18 months – current planned submission for review by government is end of 2019

When the Business case has been developed and completed the plan will be submitted to government for scope and funding approval. Upon completion of Business Planning the project will move into procurement followed by construction. All costs will be finalized in the business planning phase.